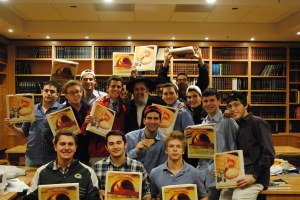 The upcoming holiday of Passover was on the minds of members at the Rutgers University Chabad House at the weekly Tuesday event this past March 25, 2015. In order to prepare, freshman Maggie Klein organized a Matzah packaging event. The purpose of this event would be to prepare boxes filled with a considerably sized piece Matzah for distribution amongst the Jewish population on campus and New Brunswick. “Not only will these packages be given out for Passover in front of Brower and on Livingston campus,” commented Rabbi Shaya, “But they will also be giving them out the local hospitals and RA’s to distribute to students.”

As Rabbi Shaya was explaining all of this, it was evident that the volunteers behind him were enjoying their work. They had organized themselves into an assembly line to produce the Matzah packages in the most efficient manner. Encouraging one another, each student collaborated in their specific job. One group of students popped the box out from flat cardboard cutouts, another faction put the Matzah inside the boxes, and a final group of student both closed and stacked the boxes. What was most striking about the scene was that other guests at the Tuesday night event, who were not originally signed up volunteers, kept offering their help in the assembly line. It was not unusual for groups of two or three students to contribute their labor for some time in order to facilitate the packaging process. Moments like this just illustrate the beauty of unity and community within the context of Jewish culture.

So what’s so important about Matzah anyway? The ancient traditions dating back to the Jewish times of slavery in Egypt provide a clear answer. When the Israelites were about to be lead into the desert and out of Egypt by Moses, they did not have enough time to properly pack and prepare provisions for the long journey. Thus, the bread they made before leaving in haste did not have a chance to rise and was turned out to be flat Matzah. To this day, Jewish people eat Matzah on the first night of Passover to commemorate the exodus.

However, the symbolic meaning of Matzah goes even deeper than the Torah story. Matzah being a flat bread embodies humility, as bread that swells symbolizes arrogance. On Passover all risen bread as well as all derivatives of flour that had come in contact with water, must be removed from Jewish possession, and only Matzah may be eaten in its place. This is done to represent the removal of all pride and arrogance from the home, and the acceptance of humility.

There are many interesting traditions concerning Matzah on the first night of Passover. A popular one is the tradition in which an elder hides the Matzah for the younger family members, the children, to find. Klein, the organizer, was kind enough to relate a humorous story about her family’s personal Passover experience. “My grandpa would always hide the Matzah,” she explained, “But always on himself, like behind his chair or wrapped under the floor. One time he hid it on his back, and my brother, who was five at the time found it!” Traditions such as this help inspire connection and unity between a family, for Klein’s younger brother it was a way to develop his Jewish identity within the family unit.

On a similar note, the Rutgers Chabad is also aimed to preserve Jewish unity on campus. Besides these Matzah packages, Rutgers is also hosting a Passover event for any Jewish student on campus. Hopefully, this combined with the distribution of the Matzah will bring an extra happiness to the Rutgers Jewish population during this 2015 Passover celebration.

One response to “Matzah at Chabad House”