o share his experiences during the Second World War. The event was organized by student Taylor Heller, and was attended by Rutgers students, as well as local area residents from New Brunswick and Highland Park.  Mr. Krautworth, who recorded his memories of the Holocaust for Steven Spielberg’s USC Shoah Foundation, discussed the war from both a personal and historical perspective.

Mr. Krautworth, born in Frankfurt, Germany, was 5-years old when Kristallnacht, the night of broken glass, took place. According to Mr. Krautworth, that night was the beginning of the active persecution of German Jewry. Mr. Krautworth stated that he was fortunate because his family was one of the last Jewish families to be deported due to his father’s Slovakian citizenship. His family was deported to Birkenau where he was sent with his mother and sister to the women’s camp.

When Mr. Krautworth, arrived at Birkenau, his group did not undergo a selection because of the group’s small size. While at the camp, Mr. Krautworth remembered the constant hunger and fear. He recounted how one night the entire Roma and Sinti population of the camp was exterminated.  Mr. Krautworth, also spoke about the moments of kindness he experienced. One such moment took place when he first arrived at the camp. Some of the Polish prisoners were so incensed to see him, a child, suffering in the camp that one of them attacked the guards.

After a few months in the camp, Mr. Krautworth, was transferred to a children’s barrack with the  children who arrived from the Lodz ghetto. Part of his work in the camp included traversing the  grounds with a wagon to clean up garbage. Periodically, the guards would measure the children and  anyone who was below the desired height was taken to be exterminated. Mr. Krautworth said he was  supposed to be taken and killed, but instead the guards allowed him to return to the barracks because  he was crying.

During the liquidation of the camps, Mr. Krautworth, was forced on a death march in the winter to Sachsenhausen, where the prisoners were put on unroofed trains to Mauthausen in Austria. The prisoners were then transferred to Theresienstadt, in the former Czechoslovakia. While on the train in Czechoslovakia, the peasants would pass food to the prisoners when the guards were distracted. In this camp Mr. Krautworth, came into contact with Canadian prisoners of war who shared their Red Cross food packages with the Jewish prisoners.

Over the course of the war, Mr. Krautworth had become separated from his mother. Unfortunately, his father did not survive the war but upon liberation, his mother and sister moved to America. Instead of joining his family, Mr. Krautworth immigrated to Israel with a gr

oup of orphans. He remained in Israel until 1954, when he was medically discharged from the army. After leaving the Israeli army, Mr. Krautworth reunited with his mother and sister in America and met his future wife.

The opportunity to hear Mr. Krautworth share his experience in the Holocaust was humbling for many students. “It was an invaluable experience and opportunity to hear about the Holocaust from a survivor first-hand because we are the last generation that is able to do so,” said Rutgers student, Asher Malech. The speaker also struck a chord with many students, “It was an inspirational and thought provoking event,” said freshman Steve Gotlib, “Mr. Krautworth’s experience hit close to home for those who had relatives in the holocaust.”

This program is another testament of the continued effort and success of Rutgers Chabad and its students, to bring quality experiences to the Jewish community at Rutgers. 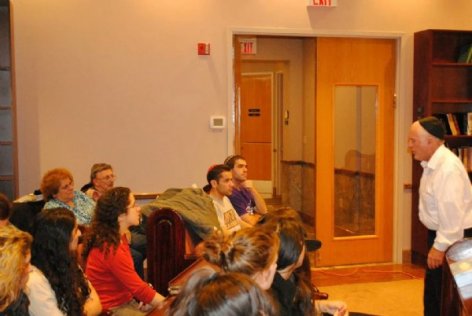 Rutgers Chabad would like to thank, Mr. Zev Krautworth, for sharing his holocaust experiences with the Rutgers community and to Taylor Heller for coordinating the event.